The Gulf Sailing Week finds its roots form the partnership between the YACHT CLUB GAETA E. V. S. and the CIRCOLO NAUTICO CAPOSELE, with the objective of bringing to life a new international sailing event in the middle of the Tyrrhenian sea.

The 2022 edition will kick off on April 20, 2022. It will start off with a calendar full of several sailing events, which will involve the crews in different classes and categories. It will all take place in the wonderful race course of the Gulf of Gaeta, as well as the Pontine and Phlegraean group of Islands. The sailing week will then end on May 1, 2022.

The Italian Championship OPEN STAR CLASS not only will inaugurate the exciting sequence of events, but it is also the last sailing race before the European Championship that will be held in Naples on April 22-24, 2022 involving many international teams.

The absolute highlight and most important event of the Gulf Sailing Week will be the Gulf’s OFFSHORE RACE: a course counting 130 nm that will be disputed along the southern coast of Lazio, winding through the Gulf of Gaeta and passing by, respectively, Sperlonga, Palmarola, Ponza, Ventotene and Ischia. Enrollments are open to all boats, both crews or doubles, in the classes ORC, IRC, MAXI, MULTISCAFI.

Following the Gulf’s Offshore Race, on April 26 – 28 it will take place the 2K INTERNATIONAL TROPHY, a team race regatta highly technical and truly spectacular. The challengers will be keel boats, 2 against 2, disputing the trophy along a race course set up very close to the coast, thus perfectly visible from ashore. The boats will be provided by the organization (MATCH25 or RS21).

Last but not least, from April 29 to May 1, the 26th edition of the PUNTA STENDARDO TROPHY will conclude the Gulf Sailing Week. A sailing event valid for the qualification to the Absolute Offshore Italian Championship and the seizure of the Challenger Trophy, one of the most coveted achievements of boat owners and skippers of the ORC & IRC class. 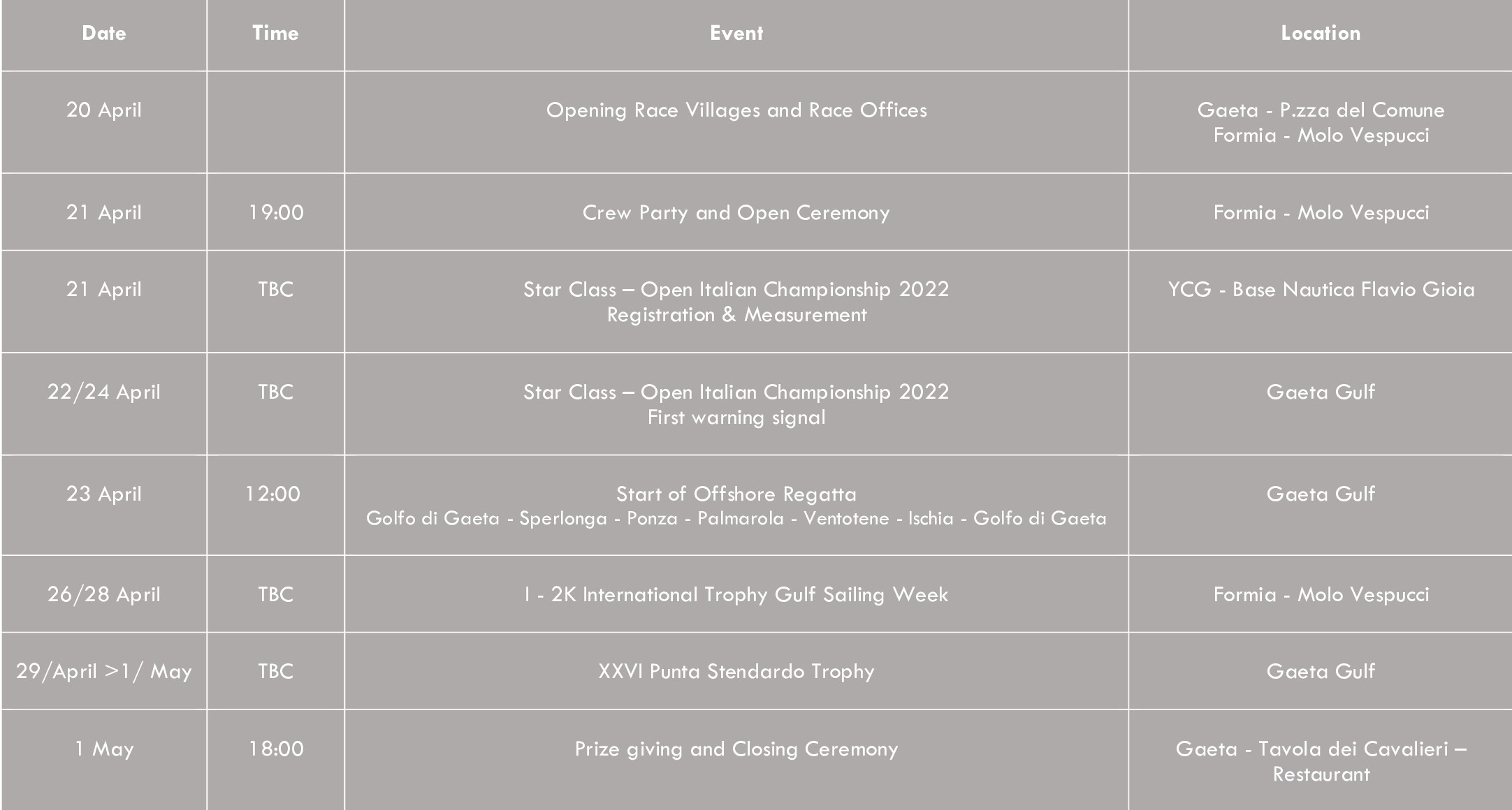 The ranking will add up the best results of the Team Offshore, Team 2K and Team Punta Stendardo.

The team can be made of the same people all along the three sailing events, or it can be composed by a Team 2K and other crews joining together.

We have planned a tracking system extended to all sailing events.

Boats, buoys, and Race Committee boat will be equipped with a tracking system that will allow for online live streaming of all events, besides safety reasons concerning especially the Offshore race.